Hockey is known worldwide to be a very aggressive game. In Ice hockey, the players wear skates meaning that their speed is significantly increased and therefore the chances of players making offences increase. Officials in the game, including the referee and linesmen, determine the degree of the offence and the punishment administered. In case of a penalty, there are several kinds that players can be subjected to. Here are the common ones. 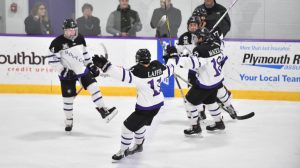 A minor penalty can be served to a specific player or the entire team. If a player trips another player or interferes with the goalie, the player is given a two minutes timeout, and the team has to continue playing without the player. If a team delays the match, a player is picked at random and sent to the penalty box for two minutes. However, the penalty is lifted if the opposing team scores a goal. Minor penalties are frequent, and once the players have served their time, they are free to return to the ice and join their respective teams.

A major penalty involves players being sent to the penalty box for five or ten minutes. Offences such as cross-checking, boarding or charging at other players are considered significant transgressions. Players in these situations are given a five-minute timeout. On the other hand, if an ice hockey player insults officials or is involved in any other form of misconduct, the penalty is a ten-minute timeout. If a player receives two penalties in a game, they are likely to be ejected from the match.

Player misconduct is considered a major transgression, and sometimes even a ten-minute break does not cut it. Offences such as throwing objects from the bench, leaving the penalty box before time is up, alcohol consumption before the game or fighting with other players lead to immediate ejection from the match. At times, the referee might choose to suspend the player altogether.